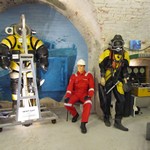 On the way to the museum I passed the car wash where I had performed previously as a mechanical a waving mannequin.

We'd decided on two costumes, one a traditional canvas diving suit and the other, a modern diver wearing a Subsea 7 overall. I also decided to use the flesh coloured Kryolan latex rather than try and match the white mannequins.

Everyone at the Museum was fantastic and there were some great reactions from the public as I suddenly moved or spoke to them as they stood by the exhibit for a photo.

The most satisfying part for me was when I was dressed as a modern diver, and one of the guides, while I was sitting amongst the other exhibits, calmly pointed me out and said that this is one of our modern divers, the couple he'd been showing around looked me up and down for a few minutes, and then moved onto the next exhibit, about five minutes later I got up and started walking past them, and they were quite shocked, "We thought you were a dummy"