If you are looking for something to surprise if not scare your guests at your Halloween party, then a living mannequin is just the ticket. A great addition for parties, museums or themed attractions, a living mannequin can take the place of one of your exhibits or simply become a new one at your Halloween event. The reactions are fantastic and will leave a lasting memory with your guests. 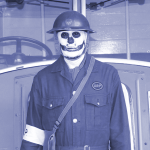 Halloween originates back to the ancient Celtic festival of Samhain. The Irish Celts lived 2,000 years. The United Kingdom and northern France, celebrated their new year on November 1st. This day marked the end of summer and the harvest and the start of the dark, cold winter. This time of year that was often associated with human death. The Celts believed that on the night before the new year, the boundary between the worlds of the living and the dead became blurred.

On the night of October 31st they celebrated Samhain, when it was believed that the ghosts of the dead returned to earth. They  would leave food and wine on their doorstep to keep the spirits at bay. They would also wear masks when the left their homes so they would be mistaken as ghosts

The Christian Church turned Samhin into All Saints day, or all hallows in the 18th Century, the night before became All Hallows Eve, this was then later shortened to Halloween.

19th Century Irish and Scottish American immigrants revived some of the medieval British Halloween rituals, Souling and Guising, which turned into modern day Trick or Treating.  In the 1950s Trick or Treating became more focused on children dressing up and more treats than tricks. 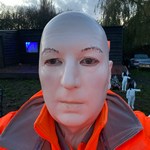