Mannequin man has worked on a number of TV shows including SMArt, Tricky TV (video), Bid TV and more recently on Louie Spence's Show Business (LSSB), where he appeared 'unusually' as himself with a rare interview, which got picked up by Harry Hill's TV burp.

The Louie Spence's Show Business TV show followed mannequin man at a couple of events, Hillhead, the international Quarrying - Construction - Recycling show in Buxton, and to Arnhem in the Netherlands, to take part in the World Living Statues Competition. 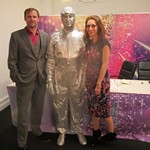