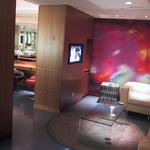 When I was asked if I would be available to be a living statue on the tv program Smart I said yes, especially as I knew that It was going to be filmed at Television Centre in the famous Studio 1 (the same studio used for Blue Peter).

I arrived quite early and was directed to a multi story car park up the road. I made my way to reception, and was met by my contact and shown to my dressing room.

It was like walking into a plush hotel room, the most impressive dressing rooms I've been given so far.

After waiting for a while one of the assistants came and took me to meet the producer, who outlined what would be happening. I then met the other two living Statues that I would be working with, Michael (mimbo), whom I’d worked with before, and Amanda, who I’d only ever heard of by reputation.

We agreed that we would all go for the same colour grey statue. I had brought with me white coloured sheet but Amanda had some grey material that she was able to lend me so that we all matched.

Next we proceeded to make ourselves up as living statues, Micheal and Amanda helped each other while the make-up department helped me apply the grey make-up all over.

After about an hour we were all ready and were called to set shortly afterwards where we met the hosts, Mark Speight and Kirsten O'Brien.

Our filming didn't take too long, and I actually got a speaking part which was cool. Kirsten kept messing up her lines during one segment which caused a slight delay.

All in all a great experience.