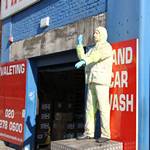 I thought it would be quite cool to go along to the Kings Cross branch, where the original mechanical mannequin used to stand, before he stopped working, and wear his old outfit; and then see if anyone noticed. Apparently he's quite popular, and one of the most photographed mannequins in London, probably because people are intrigued by his beckoning wave.

Firstly, the outfit was filthy from dirt accumulated from may years standing outside. The day-glo material had really faded, and was actually disintegrating, due to many years of sun damage. In order to originally fit the trousers on to the mannequin, they had been cut down the seems of the legs, and then glued back together; So that I could wear them, we improvised, and stapled the seems back together.

They gave me a similar pair of Wellingtons, and some of the blue gloves, that the mannequin normally wears. I then went upstairs, to start the process of making-up. It normally takes about an hour to get the make-up on, and then about 10 minutes to fit the wig; blending it in with more latex, so there are no visible joins. (In the past, I've lost far too may eyebrows when removing the make-up, so I always now use plenty of Vaseline, and cover them with a layer of tissue if possible, as this aids with the removal.)

The actual mannequin stood on a large silver box, and as I wanted to emulate him as far as possible, I elected to do the same, although I knew it would make it more difficult to interact with pedestrians, but easier with motorists, which was the point.

Simulating the mannequins movement was quite hard, as he has a beckoning action, with his other arm outstretched (annoyingly, after I looked at the videos, I realised I swapped the arm movements over, and it should have been the left arm doing the beckoning). Doing this for an extended period was very tiring, and sometimes I reverted to the waving action, which actually got more of a response, i.e., people actually waved back.

In my previous blog I mentioned that the mannequin, affectionately know as Michael, was due to have some refurbishment. I found out that his new outfit had already been bought, so I thought it would be cool to wear it and see if it got a better reaction. Well the yellow colour of the outfit worked really well against the blue wall and the red sign, and I got a lot more notice.