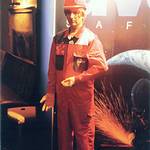 I was to be part of a small exhibition of new UVEX safety products, just outside the room where the conference was taking place. During the breaks, the delegate would come out and look at the exhibition, and then return to the seminar for the next part. I decided that as there were a finite number of people at the seminar, being subtle was going to be the best way of not blowing my cover in the first 10 minutes.

So I paced the reveals, remaining totally still, and just winking if someone got really close. During the seminars, I could go off and take a rest, but was back ready in position for the next break in the conference. For the next break I was a bit bolder, and allowed more people to see with bolder movements.

Finally, during the last break I was even more obvious, but even so, when the event was over a few people came up to me and told me that had thought I was a real dummy throughout the whole day