Below is a typical Breathing Apparatus (BA) drill using a 'living' drag dummy as a casualty.

The firemen must locate the drag dummy casualty in poor visibly, and recover it to a safe location outside the firehouse. They must make sure that this is done safely, so as not injure themselves in the process or the dummy casualty.

The dummies are weighted between 70 and 80 kgs, so this must only be done by two people. The dummy being used in this exercise weighed 90 kgs; Throughout the exercise, the trainee fire recruits were unaware that the dummy was alive, and treated it like a normally drag dummy, as you can see from their surprise in the final part of the video.

the drill dummy is then positioned for lifting

One Fireman holds the dummy round its waist, locking onto the arms

While the other fireman lifts the dummy's legs

The dummy is carried out of the firehouse

And placed on the floor, in a safe location

Firemen pose for a picture with the drill dummy

Firemen pose for a picture with the now animated dummy 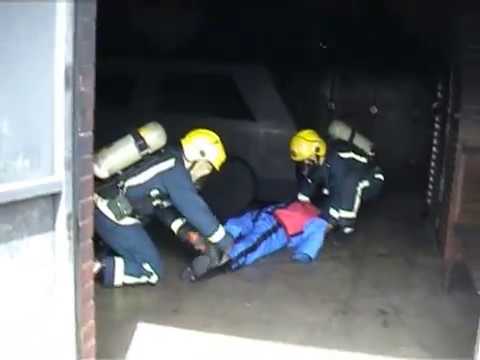